Before joining the firm, Jennifer served as a law clerk to the Honorable Elizabeth L. Branch and the Honorable William H. Pryor Jr. of the U.S. Court of Appeals for the Eleventh Circuit.

Successfully conducted a multi-day arbitration of an inter-governmental dispute, prevailing on all issues.

Successfully upheld a $45 million jury verdict on appeal to the Supreme Court of Georgia.

Successful oral argument in the U.S. Court of Appeals for the Eleventh Circuit on behalf of a major corporation, avoiding liability in a multi-million-dollar declaratory judgment action.

Successfully defended on appeal an individual plaintiff’s right to a jury trial, upholding the denial of defendant’s motion to compel arbitration.

Vigorously defended corporate client against breach of contract suit in federal court, enabling settlement with $0 liability and restoration of business relationship with plaintiff. 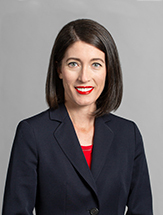