Danny Vincent represents both plaintiffs and defendants in all aspects of civil litigation. In particular, she focuses on trial consulting and appellate services for complex plaintiffs’ personal injury cases. She also has extensive experience in business torts, commercial contracts, and healthcare. Prior to practicing law, Danny received her Master’s in Public Health and worked as a health policy analyst and advocate at the state and local level in Georgia.

Early involvement in a case by appellate counsel can dramatically improve a case’s chances on appeal. In addition to her appellate work, Danny frequently serves as co-counsel at the trial level, assisting with trial strategy, expert witnesses, and legal issues such as complex and novel discovery issues, dispositive motions, jury charges, and evidentiary motions.

In addition, much of Danny’s time at the moment is spent advocating on behalf of children of opioid drug abusers in a lawsuit pending in Glynn County. Plaintiffs sued the distributors and pharmacies that unlawfully and recklessly distributed opioids into the community. She is looking forward to getting these families justice at trial in 2022.

CALI Excellence for the Future Awards 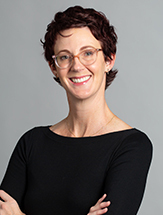