Outside the office, Amanda Kay serves as adjunct faculty at the University of Georgia School of Law, where she teaches a course on sexual orientation and gender identity law.

Prior to joining the firm, Amanda Kay served as a law clerk to the Honorable Joel F. Dubina, U.S. Court of Appeals for the Eleventh Circuit, and Chief Judge W. Keith Watkins, U.S. District Court for the Middle District of Alabama.

Currently representing sex trafficking victims against hotels that facilitated and participated in their trafficking.

Currently representing liquidators of entities looted by a years-long, multi-jurisdiction Ponzi scheme in claims against an international bank the liquidators allege substantially assisted in the scheme.

Part of a team who guided Equifax investors to a $149 million cash settlement related to the 2017 data breach.

Part of a team who guided investors to a $50 million cash settlement of allegations that the investors purchased stock at prices artificially inflated by defendant’s misrepresentations about the source of its revenue.

Successfully defended a $500 million RICO case filed against twenty corporate defendants, alleging conspiracy spanning four continents and four decades. Not only did Amanda Kay and a team of Bondurant lawyers persuade the trial court to dismiss the case, they also successfully defended that dismissal on appeal in the U.S. Court of Appeals for the Eleventh Circuit.

Successfully defended a private corporation and its outside counsel in a series of related malicious prosecution suits filed in both state and federal court alleging RICO claims, conspiracy, and violations of plaintiffs’ constitutional rights. Amanda Kay assumed responsibility for arguments regarding the retroactive application of amendments to Georgia’s RICO statute. Ultimately, the Georgia Court of Appeals adopted the Bondurant team’s reasoning, and all cases were resolved at the motion to dismiss stage without any discovery having been taken.

Regularly represents a Fortune 50 retailer in business tort, breach of contract, and intellectual property disputes involving the company’s relationships with vendors and suppliers.

Successfully argued on behalf of the former North American General Manager of a leading European medical products distributor to send employment-related dispute to arbitration. The Company brought suit against Amanda Kay’s client and opposed efforts to arbitrate the Company’s claims and Manager’s counterclaims, but Amanda Kay persuaded the court that arbitration clause in employment agreement covered these disputes. Amanda Kay then handled settlement negotiations from start to finish, reaching a favorable resolution for her client.

Represents a certified class of juvenile pretrial detainees entitled to special education services who have been denied those services during detention. In addition to certifying the class, the U.S. District Court for the Northern District of Georgia granted summary judgment in favor of the class.

Won reversal of motion to dismiss in Eleventh Circuit Court of Appeals on behalf of Georgia inmate in an Eighth Amendment failure to protect claim after the inmate was beaten and stabbed by fellow prisoners following repeated threats and prison’s refusal to transfer the attacked inmate to different dormitory.

Negotiated favorable settlement for a Fulton County Jail detainee in an excessive force suit against jailers.

Regularly represents transgender Georgians in efforts to secure conforming identity documents and connects dozens of others with volunteer lawyers to do the same. 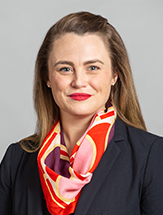